I’m about to head out on the biggest road trip of my life. I mapped it out the other day and I’ll be putting in over 2,400 miles in the month of September. That’s a lot of time with me on the open road.

I don’t feel daunted by that. Well, maybe a little. But mostly, I feel excited. I have always loved a good road trip. Here are my top ten reasons that going on an adventure makes me feel most alive.

|Reason #10| The best conversations happen in the car

My affinity for road trips probably started when I got my first car. A 1999 Chevy Cavalier. Forest Green. My best friend from high school and I would roam the streets of our small Iowa town. We’d alternate between going through the Arby’s drive-thru, ordering curly fries in a British accent and wandering the streets, “philosophizing” about life.

There was something magical about my little forest green car. Driving aimlessly, reveling in the freedom of our pre-curfew hours, Jaci and I would have the best conversations about anything and everything.

Maybe it’s the stretches of time on long trips. Maybe it’s the sense of possibility in the air. Being en route has a way of helping people drop their guard and open up.

It doesn’t take long for my not-so-subtle nerdiness to come out.

It hit me the other day why I’m not that familiar with the popular music from my era. I have to just smile and nod my head along to the vaguely familiar beat when everyone sings along at weddings and parties.

When everyone else was driving around, listening to the top 40 songs, I was probably listening to The Count of Monte Cristo (a 24 disc feat) or The Series of Unfortunate Events. I love delving into a good story when I have a long drive ahead of me.

Turns out you can have too much of a good thing. I’ve noticed that if I listen to an audio book for too long, the calming British voice will start narrating my thoughts.  I try to balance out my stories with music or a phone call with a friend, but I still feel giddy at the thought of getting lost in a novel or podcast.

I’m sure many people have looked over at a stoplight and seen me talking back to the narrator or gasp in surprise at a plot twist and gotten a good chuckle. There is something distinctly wonderful about the human love for a good story.

|Reason #8| The (sometimes not so) unexpected detours

One time, my friend Jamie and I went on a “Choose Your Own Adventure” road trip. We set out with no destinations in mind, ready for the open road and the spontaneity that would ensue. In the console between our seats were cards that we’d draw at random, saying things like “Take the next exit and find a place to go on a picnic.” or “Ask a local where to go to dinner tonight.” This trip resulted in us heading over 800 miles of travel in under a week. There were so many unexpected delights that we never would have come across if we had planned everything in advance.

The small hole-in-the-wall restaurants. The quirky little towns and well kept secrets of America. How else will we find these hidden gems unless we get in the car and go? 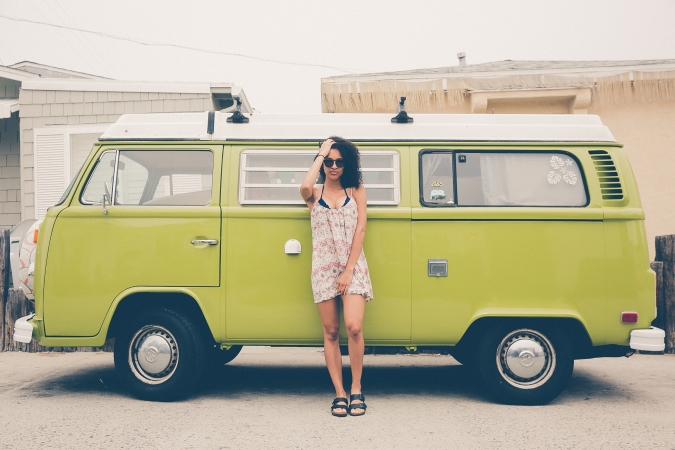 I always associate traveling with giving yourself permission to splurge. Especially in the food department.

On the first day of vacation, my family would always pile into the car and head to the grocery store. This was the one time a year where the answer to any “Can we get…” question was always yes. Rice Crispy Treat Cereal? Yes. A king-sized bag of Peanut M&Ms? Yup. Two bags of Bugles? Why not?

My desire for what to splurge on has taken a somewhat healthier route, thankfully. V-8, pistachios, and a Cliff Bar are my usual gas station purchases. (Ok, and sometimes still Peanut M&Ms. I can’t resist!)

I love the sense of extravagance that traveling brings. The simple pleasures that you gift yourself add to the joy of the trip.

|Reason #6| Creativity born out of an escape from boredom

There us a distinct brand of goofiness that comes from being in the car for what feels like forever.

I became an expert at long stretches of car travel from the summer vacations our family went on every summer. Armed with a bag of toys, blankets, and some Rope Twizzlers, my two siblings and I would pile into our Dodge Caravan for the long haul to some idyllic destination. It wouldn’t be long before the blankets were webbed into a fort and the Twizzlers were fashioned into a red, braided beards on our faces.

Then in college, several of my friends decided to road trip to Charleston. We piled into this oversized 80’s van and drove halfway across the country and back in the course of a magic-filled week of epic adventures. Between the evenings of city exploring and camping in the Smoky Mountains were long stretches of time in the car. Being the creative souls that we were, we filled that time with storytelling. Joe spent the entire state of Virginia recounting the epic tale of The Lord of the Rings. This lost art of storytelling was rediscovered. We were literally a captive audience, with nowhere to go in the giant van. But we listened with rapt attention, drawn to Joe’s larger-than-life recounting.

Someone said that only boring people are bored. So what else is a creative person to do when there’s 200 more miles to your final destination, and conversation runs dry?

I am not one to sing in front of an audience. Karaoke makes me cringe. But with the right person, and the right song, in the right car, and I’ll belt it out with the best of them.

Hand motions and car choreography included, I love a good car concert! (My roommates and I once had the idea to go “car-oling”–a version of Christmas caroling that included a choreographed dance to the N’Sync Christmas album. This was one of our better ideas as a collective group, I think.)

Who needs an open mic night? My car is all the stage I need.

|Reason #4| Margin is created in the in between

We don’t follow the normal rules of behavior when we are in transit. In the unavoidable commute time between point A and point B, we find space to just be.

I find driving to be an almost meditative experience. The mental clutter settles like flakes in a snow globe as the endless ribbon of highway slips by. Especially in a culture that accepts the frantic pace of unceasing activity and productivity, this quiet intermission is often mistaken for an annoyance rather than a gift.

I always get my best thinking done in the car. For awhile, I worked in a town thirty minutes away from where I lived. While others would drop their jaws at the length of my daily drive, I would look forward to my commute to and from work. Turning off the radio, I’d let my thoughts unfurl as I processed my day. There is something so helpful about driving in sorting out thoughts and ideas.

As I was planning out my route to the west coast, I have some eight, nine, and even ten hour days in the car. I get a week where my full-time job is to drive. It will be a living out of this in-between space, as I physically and mentally shift into a new season.

One of my favorite things about the trips I’ve taken is the people I’ve met. Getting out of your own stomping grounds opens you up to the possibility of encountering other colorful characters.

Like the guy I met at a coffee shop in Colorado Springs. Self-proclaimed “Hobo Greg” struck up a conversation with me shortly after I sat down with my cup of coffee and journal. Not long into the conversation, he mentioned that he was a poet. He shared some of his poems, one part sheepish, two parts proud. We talked about the ways that writing can bring people together. Before I left, both of us had written a poem for the other person.

Or the time that my parents came to visit me when I lived in Brazil. We rented a car for the weekend and explored the state of Goiàs, relying on my very patchy Portuguese to get us around. The people of Brazil continually surprised me with their generous hospitality. Many times we had to stop to ask for directions, and without fail, smiling and gracious, they listened to my attempts at communication and pointed the way we needed to go.

Some end up being kindred spirits. Others are people that I’ll never see again, but I still think of them occasionally. With all the people I encounter, I am shaped and changed by their stories, and their willingness to hear mine.

|Reason #2| Being in the midst of ordinary beauty

I am a child of the Midwest. The “flyover states” as coastal folk like to dismissively label us. It’s not a destination. Not one of the Seven Wonders of the World. But there’s an unmistakable and unassuming beauty about the rolling hills of cornfields or the stubborn wildflowers growing in the ditches. Long country drives expose us to the beauty we might otherwise pass by.

I can’t wait to pull over in the foothills of the Rockies. To feel the smallness of the wide open plains of the West and marvel at the winding roads of Highway One.

There is beauty that we seek in our destinations, but surprising vistas can catch us off guard while we are on our way.

|Reason #1| Being found by getting lost

Road trips lead me on detours that end up being remarkable. I love figuring out how to get somewhere without using Google Maps. (Admittedly, this is the way that everyone drove ten years ago but still…it makes me feel like a bad ass.) I love the process of finding my own way. Inevitably, letting go of the certainty of GPS, I have moments or miles of feeling lost. I stumble upon places that I didn’t intend to go.

“The best journeys answer questions that in the beginning you didn’t even think to ask.” — 180° South

The process of getting lost (intentional or accidental) feels like a tangible metaphor for living out the questions to which you don’t know the answers. Right now, there are so many unknowns. So many questions that don’t have answers. So many roads I will be traveling on that are unfamiliar. But an adventure outward into uncharted territory is just as much an inward adventure.

The risk of unknown does feel scary, but the beauty of possibility beckons.

So what is it that you love about road trips? I’d love to hear from you! Plus, I’m putting together a “Road Trip Kit Giveaway” with all of the essentials that you would need to hit the road with a friend in these last few weeks of summer!